Our goose Sheldon and our dog Cotton never really got along. I think each one thought they had to protect us from the other, they didn’t realize they were on the same side. In their own space each did their job to let us know when someone was coming to our house, honking or barking. However, when someone entered their shared space, they would bark and honk at each other. Sometimes Sheldon seemed to even taunt Cotton by swimming in the tank, just out of her reach. 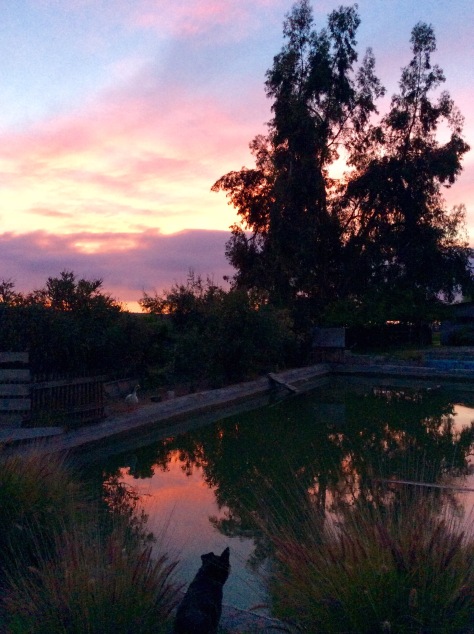 Sadly last week they fought, (we didn’t see what happened) and Sheldon was badly injured. He is a tough bird, and I thought there was a small chance he would pull through, however he died a few days later. It was hardest for my daughters who raised him from a gosling.

We will miss his honking. He especially liked to honk along with Pink Floyd when we played it loud.

Living on a farm with animals means at some time you have to face the death of those animals. Sometimes it is wanted, when meat is needed, and sometimes it is unexpected, like when animals become sick or injured. We have had all of these deaths on our farm, and I have helped in butchering animals as well as having sick animals die in my hands. You can usually see it coming, and I am better prepared than when I first arrived on the farm.

However there is one type of death we rarely see on the farm, and that is from old age. Most of our animals are livestock and not pets. There are a few exceptions, like Sheldon, our goose who we raised from a gosling. And Sara, our goat.

Sara came to the farm as a baby In 2001 when we bought our angora goats. Her mother died shortly after and she became attached to us, especially my oldest daughter. The two of them would play games of chase together. She is always the first to come to say hello and have you scratch her between her horns.

This year we noticed that her age was starting to show, and we knew that she wouldn’t be around forever. She started to separate herself from the flock and was slow to come in from the fields. Last week she became weak, so we kept her in the corral with her own food where the other goats wouldn’t push her.  She spent most of the time sitting, getting up to eat, and giving me the odd “baaa” when I checked in on her.

However, I knew when I saw her Sunday morning that she was at the end, and was prepared for her death later that day. I knew it was coming, and I knew she was in a better place, (wherever it is that goats go to jump and play in their afterlife), but I wasn’t prepared for how much it would hurt when I covered her grave, knowing I would never see her again. She would have been 12 this year, which is not extremely old for a goat, but was old enough for her. 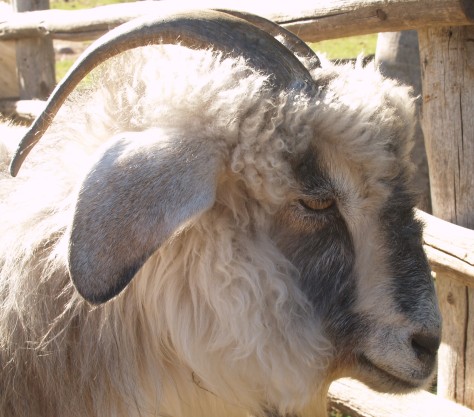 No, not in the USA, but here in Chile’s local elections. For the first time in Chile the inscription for voting is automatic and voluntary. Before you had to be registered, and once you were you HAD to vote.  I was never registered before, but now I was put into the system automatically.  Last week I went on-line to see where I had to go to vote, and today with my husband we went and voted.

There were no lines and the people were very friendly.  Unfortunately there were no instructions on the voting slips and I put a tick and not a line, so my vote may not count! With all the moving I have done, I have not had much chance to vote.

Now we have to wait till 6pm when they will start counting the votes.  They do this by hand marking each vote on the classroom chalkboard. (Voting takes place in different schools.)  It will be the same for the presidential voting in 2013.

I also have some other news, sadder news.  I don’t really have the heart to write about this now but I couldn’t ignore it either.  For anyone who follows my blog, you may remember that my father’s mom died earlier this year, (this post).  Earlier today my Uncle called my father to tell him my Grandfather had died this morning. We knew his quality of life was not good, and it is better that he is not suffering, but it is still hard.

I wish I could say more, but for now that is all.

When I first met my husband, and we went out together, I would get jealous of how he would always run into old friends. Friends from university, high school, or elementary school, from the old neighbourhood or from a football team.  He seemed to know everyone. Most of my life I have spent living in different places, and I rarely “run into” old friends.

I have been living in Chile for over 15 years, and 11 of those years my daughters have studied at the small rural school five minuets from our house.  I have become in some way a part of the community.  I have made friends, and run into them when I am out. It is nice, but it also comes with sadness.

There have been many deaths in this small village, from suicides, and car accidents to death during childbirth.  Most of these people I have only know to say hello, and so during the Masses at the school or the long train of cars to the cemetery I stay back and observe the villagers’ grief from a distance.

Yesterday one of the school’s Tías died of cancer.  She was also the mother of one of my oldest daughter´s class mates. In most Chilean schools the mothers spend a lot of time together.  We work together all year to raise money, we have end of year days out, and even camping trips together with our kids.  We spent nine years watching our children grow.

I have not seen her much since our kids “graduated” 8th grade, but I have many memories of her and how strong she was when she was first diagnosed with breast cancer. My  heart goes out to her family, especially her three boys. 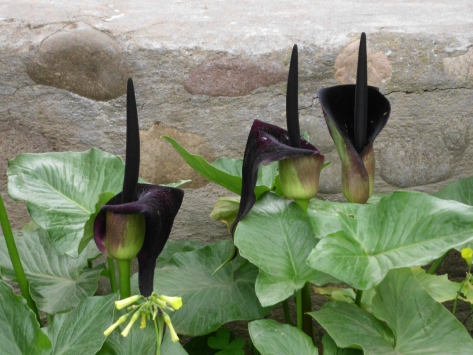 Calas negras, from our garden, they only flower in October, and seem fitting.

Living so far away from family my father and I know that we run the risk that bad news is going to sneak up on us.  We have been preparing ourselves for the possible death of my grandfather.  He is a brave, proud man who fought in WW2, and up until 2011 had lived alone with my grandmother.

Last year his mental and physical health meant that he was admitted to a mental health assessment unit – and then into a  residential care home.  My grandmother visits when she can, but he is rarely the man he used to be.  When I left the UK in January of 2011, I cried when I hugged him good bye, because we both knew it would probably be the last time I would see him, and I was his “little princess”.

So Monday morning when my uncle called, my dad was shocked to hear that my grandmother had died.  Dad knew that she had been sick with a cold the week before and my uncle had stayed with her trying to convince her to go to hospital.  However my grandmother was a very tough and stubborn woman and she has always had a profound fear of hospitals.  She refused absolutely to go until my uncle called the ambulance and forced her.  She died less than 24 hours later.

For the past 15 years I have been visiting both sets of grandparents and watching them age.  Every year that I go back to the UK has brought new worries about their health and quality of life.  My mother’s dad died first, (a knitter and I have all his needles), and in 2010 we were with my mom’s mother when she died.  Now my dad’s mother, also a knitter.  I still have all the sweaters she knit for the girls; from newborn up to 5 years, in all colours of the rainbow.

It is impossible for me to write in one post about my grandmother’s death; all of the mix of emotions, feelings and thoughts. Because granddad’s mind is now so damaged and confused – it is the end of an era.  It is not just who she was but also about all of my grandparents together, and about how we prepare for old age and care for our parents.

My Mom (who is here visiting me) says, “there went a woman in control – Ah that I will  have that kind of control to the end.”

and they say "oh yes I can hear your accent"

"...but, I grew up in the United States and the United Kingdom, and have spent the last 10 years in Chile."

With an accent that is hard to place, I am a mother and wife, a crafter and daughter, and a "kind of" farmer, who will have to lose the "kind of" and get serious.

What I have been writing

All Sorts of Things